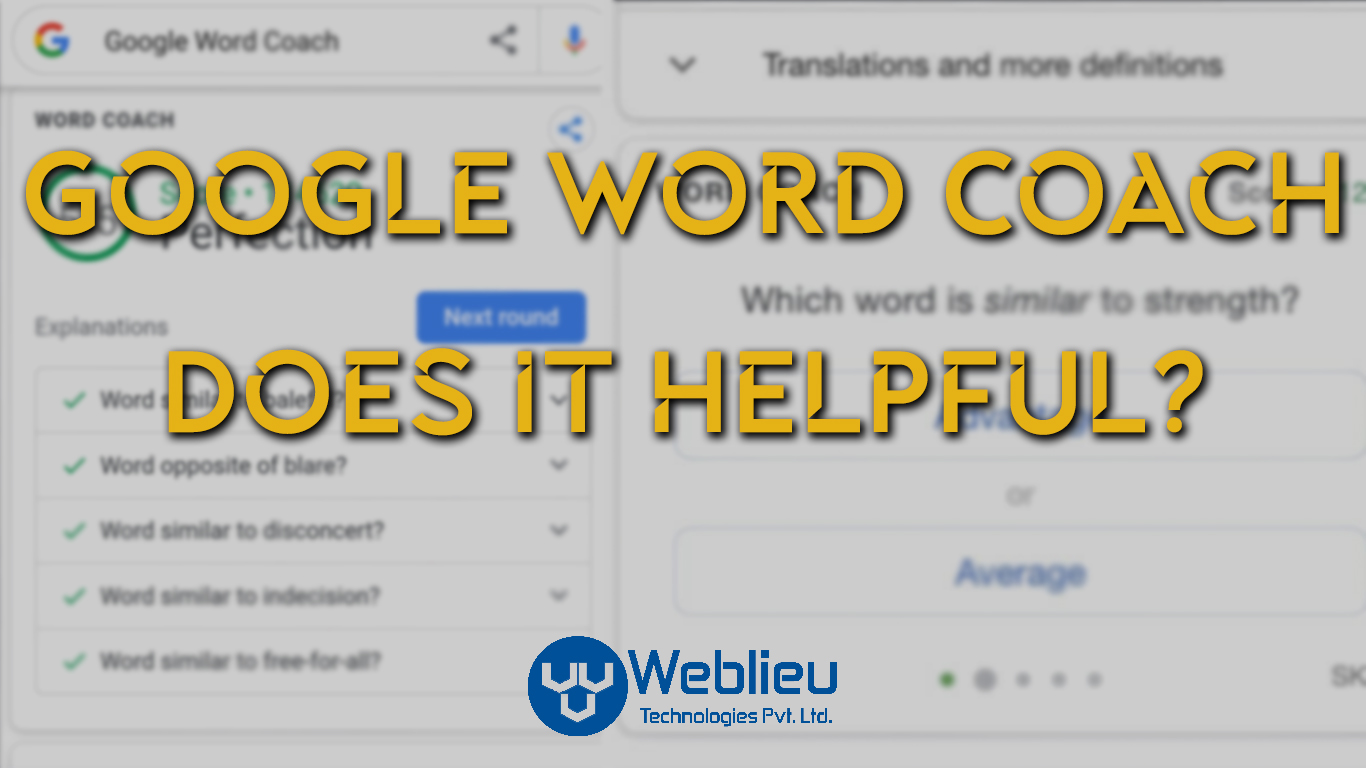 Do you know that Google has a tool called Google Word Coach, this tool helps to learn new words. This is the #1 Fun Game to Learn English Vocabulary

Maybe you don’t know, Even if you know, still your knowledge can increase with the information given in this post.

Yes, you read right, Google has created such a tool called google word coach for all the countries where the English language is used less or minor.

Although this tool does not have google-DOODLGAME still it can increase our knowledge. With the help of this tool, we can easily increase our English vocabulary.

WHAT IS GOOGLE WORD COACH?

Google has launched this tool for those people who are weak in speaking their English. They can improve their vocabulary very well with the help of the google word coach tool.

This new game of google word coach helps in increasing the vocabulary of the people in a new way.

Yes, read it correctly, this game is based on vocabulary, which is to make people’s vocabulary strong in the English language.

If they want to strengthen the English language for all the people and want to spend their time learning something in the time of this epidemic, then this tool is a very good way for them.

Have you ever noticed that whenever you find the meaning of any kind of word in google, then the word similar to it is asked at the bottom of the google dictionary?

This is done by google word coach salt game in which something similar to the word you find in google or vice versa is exposed in front of you in the form of a game.

You can also collect points by playing this game. Let us tell you that this game has been launched only in those countries in which the English language is not prevalent i.e. non-English speaking countries. Like India, Nepal, Bhutan, Bangladesh etc.

Google launched this game for those countries in which the English language is not operated and is spoken almost exclusively.

The motive behind launching this game is to promote the English language for those people who want to learn something.

HOW TO OPEN GOOGLE WORD COACH?

This game is neither visible on any website nor played through any kind of app. We can see this game only in google search.

If you want to play this game, then search google word coach in English, you will see something like a kind of small box which you can enjoy by opening this game.

Even if you search the meaning of some kind of word in google, even then this game will be exposed in front of you, which you can play by opening it.

For example, if you find the meaning of the word cricket in google, then you get a question under google dictionary “WHICH WORD IS SIMILAR TO CRICKET” This game comes from google word coach as you answer such question. As you go, the label gets tougher.

If you want to play this game, Simply search Google Word Coach. Then after, a small box is open on which you can click and enjoy this game. We want to tell you that you can’t play this game on a computer, it is available only for mobile.

How questions are asked in the word coach game?

Although you will enjoy playing this game, in this game you will be able to answer only three types of questions of any word.

Will it any money to play Google word coach?

You can not earn money in this game of google, but you can make a score. In every game you have to answer 5 questions, behind every correct answer there is some point, for which you get points.

After answering every 5 questions, you get an option to go to the next level and thus you move slowly and your label becomes hard.

Is there any prize for the game Google word coach?

In this game, you have to get points as PRIZE which you can share with your friends. The interesting thing is that in this game, if you give wrong answers, then their points are not deducted.

Is there any other English game like Google Word coach?

You will find many such games in Google’s Play Store because Google has not officially launched this game in Play Store.

If you want to enjoy this game, Simply search “google word coach” on google.

We have already told you that you can play this game only on a mobile. When you start this game in the chrome browser, then an arrow sign will appear on its right side.

Some of the drawbacks of Google Word Coach Game:

Just as we can learn a lot by playing this game. Similarly, there are some flaws of this game that we want to share with our readers;

1. You can play this game only on mobile, you cannot enjoy it on the computer.

2. This game can be played only in up Chrome browser, as soon as you close your browser, your game ends.

5 reasons how to grow your business with digital marketing

How to Build Backlinks and what is Backlinks?

Canonical tag – What is it and How to Use It?

Weblieu Technologies Pvt. Ltd. is leading as the Web Designing Company in Delhi. We promote profitability for our clients and ourselves by delivering the best IT solutions and their successful implementation.